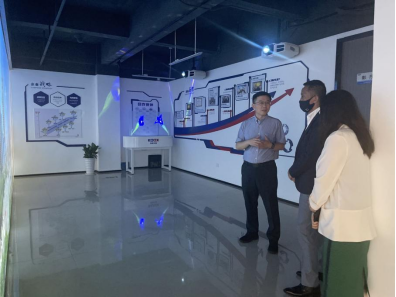 President Takahashi and Hongfen said that Mitsubishi UFJ is the largest bank in Japan and also a global bank; Shenzhen Branch was opened in 1986, and its business scope covers Shenzhen, Dongguan, Huizhou, Fujian Province, Guangxi Zhuang Autonomous Region and other southern regions. It carries out comprehensive banking business centered on Japanese funded enterprises, and its customers also include Taiwan funded, Hong Kong funded, Korean funded, Chinese funded enterprises, etc. As a national innovative city and "China's Silicon Valley", Shenzhen has also attracted many senior executives of large Japanese enterprises to come to investigate in recent years to explore opportunities for cooperation with Shenzhen's science and technology enterprises. Japanese enterprises in Shenzhen also have the need to develop new products and improve customer satisfaction with the help of Shenzhen's advanced technology. We learned that Optics Holography is a company that has the world's leading core technology of photonic crystal materials and independent intellectual property rights to develop and produce photonic crystal optical films. Most of its products have been adopted by Japanese funded enterprises, and Dr. Guo, the founder of your company, has been engaged in research at the University of Tokyo and Fujitsu in Japan. With the help of this trip, after understanding your company's products, application scenarios and future development direction, we hope to take this opportunity to establish contact with your company, increase mutual trust and understanding, and bridge the gap between your company and Japanese technology companies.

Prev: Liu Chunxiao, Secretary of the Health Working Committee of Nanshan District Party Committee, and his delegation visited Optical Holography
Next: Warmly celebrate the honor of Optical Technology as a new enterprise of